Global Icons for our Critical Condition

Published by Kismet Press LLP under an exclusive license to publish. Commercial copying, hiring, lending is prohibited. The ebook is freely available  to read online or download at kismet.press under a Creative Commons Attribution-NonCommercial-NoDerivatives 4.0 International (CC BY-NC-ND 4.0) license.

Monsters of Modernity explores the contemporary human condition through a selection of globally iconic monsters. The authors explore diverse monsters for what they reveal about the world in which we live and for the ways that they enable us to address critical issues facing humanity. Although monsters might be feared and thought of as threatening, the authors show how each monster brings us to a deeper appreciation of various aspects of our troubled world, from gender relations, to the ongoing impacts of colonisation, to neoliberalism, to the fragility of humanity’s place in the world in the Anthropocene.

Monsters of Modernity explores new ground in the conventions of authorship and scholarship, and will be a valuable companion to anyone interested in the study of monsters as well as those seeking engaging ways to explore and teach key global issues. Join the authors as they explore the critical condition of our age through their explorations of Chimera, Leviathan, Vampires, Bunyips, Predator and the Xenomorph Alien, Pokémon, Dragons, and Godzilla.

Julian C.H. Lee is Associate Professor in Global Studies at RMIT University, Australia. He is the author of a number of books including Policing Sexuality: Sex, Society and the State; Second Thoughts: On Globalisation, Malaysia, Society and Self; and Women’s Activism in Malaysia. He is also the editor or co-editor of several volumes including Narratives of Globalization; Punks, Monks and Politics: Authenticity in Thailand, Indonesia and Malaysia; and Trajectories: Excursions with the Anthropology of E. Douglas Lewis. In addition to having been a columnist for magazines in Malaysia and Australia, he has also produced several short documentaries including ‘For Japan, Our Sister’; ‘Caring at a Distance’; and ‘Be a Superhero’.

Ani Landau-Ward is associated with the Social and Global Studies Centre and the Centre for Urban Research at RMIT University, where she has been teaching international development, social and political theory, and globalisation in RMIT’s Bachelor of Arts (International Studies) program. Her current PhD research is a socio-legal analysis of the governance and justice implications of digitisation in property rights administration, in the international law and development field. She brings to her academic work professional experience in community work, land and housing justice advocacy, and participatory architectural design. Her research has been presented at the annual meetings of The Association for Law Property and Society, and the International Academic Association on Planning, Law, and Property Rights. She has also published on the opportunities for Indigenous land governance with the Centre for Urban Research. Her scholarly writing has been published in the Springer Global Encyclopedia of Public Administration, Public Policy, and Governance; the New Zealand Journal of Asian Studies, and the volume Urban Asias: Essays on Futurity Past and Present.

Hariz Halilovich is an award-winning social anthropologist and author; he is Associate Professor and Vice-Chancellor’s Senior Research Fellow at the Social and Global Studies Centre, RMIT University, Melbourne. His main research areas include place-based identity politics, forced migration, politically motivated violence, memory studies and human rights. Much of his work has an applied focus, and he has conducted research on migration and human rights-related issues for a range of non-governmental and governmental bodies, including the Minister for Immigration and Citizenship (Australia). His award-winning book Places of Pain: Forced Displacement, Popular Memory and Trans-local Identities in Bosnian War–torn Communities was published by Berghahn, New York–Oxford and his latest book Writing After Srebrenica by Buybook, Sarajevo. In addition to academic text-based outputs, he has also produced multimedia exhibitions, works of fiction and radio and TV programs.

Peter Phipps is a Senior Lecturer in Global Studies at RMIT University, where he is also associated with the Social and Global Studies Centre. He undertook post-graduate training in cultural anthropology at the University of California Berkeley, and completed a PhD on the cultural politics of postcolonial theory at the University of Melbourne. He has published in journals including Ethnos, Alternatives, and Communication, Politics and Culture on Indigenous festivals, commemorations, tourism and the politics of cultural globalization. He is a founding member of the Centre for Global Research and has consulted to a number of organizations and government bodies including the City of Melbourne, Victorian Multicultural Commission, the PNG Department for Community Development, ATSIC, ATSIAB (Australia Council), UNDP (Sarajevo) and the Yothu Yindi Foundation.

Richard J. Sutcliffe is an independent researcher who has conducted research on new religious movements and urban youth culture. He is interested in the role of the creative imagination in the articulation of human social life and the inter-urban dynamics of emergent forms of transnational visual culture. He has written on subjects including Western esotericism, social theories of modernity, globalization, and street art. His writing has been published in places including the journal Canberra Anthropology, and in the volumes Paganism Today, Managing Modernity in the Western Pacific, The Malaysian Way of Life, Second Thoughts: On Malaysia, Globalisation, Society and Self, and the Springer Global Encyclopedia of Public Administration, Public Policy, and Governance.

Table of contents
1. Here Be Dragons
2. The Functional Autonomy of Monsters – A Metalogue
3. Polymorphous Monstrosity: Some Chimerical Reflections on the Question – What are Monsters?
4. The Bunyip, and Other Australian Monsters
5. Leviathan, the Sovereign
6. Is Alien to Predator as Nature is to Culture?
7. Vampires and Ratko Mladić: Balkan Monsters and The Monstering of People
8. Pokémon Reaping
9. Godzilla, The Unmocked God

This volume offers an exciting and innovative reflection on the current anxieties, challenges and dangers of our current global era by inviting us to ‘think through monsters’. This invocation points to looming unknowns, shape-shifting ambiguities, and decentering logics of fear and possibility which together facilitate new modes of intimate engagement with a range of issues such as colonial violence, environmental degradation, decline of the west, and the enduring pain of genocide. This is a beautiful, moving, timely and evocative collection.— Eve Darian-Smith, Chair, Department of Global and International Studies, University of California Irvine, and co-author of The Global Turn and author of Laws and Societies in Global Contexts.

Monsters may be as old as human life (and our collective anxieties) and today they continue to stalk us — and fascinate us— in a time of technological transformation, inexorable globalisation, and political polarisation.  Investigating the creatures of contemporary popular culture as well as less-celebrated beasts from Australian folklore to war crimes tribunals, Monsters of Modernity explores our anxieties and obsessions through the monstrous imaginary of dark colonial legacies, the profound consequences of global warming, and the pervasive influence of state power and capitalism. Like monsters themselves, this volume is unconstrained and fearless, ranging across geographies and chronologies, breaking through traditional disciplinary boundaries, and challenging the conventions of staid academic writing.  Monsters of Modernity is a sophisticated, imaginative, provocative, and very welcome addition to the growing scholarly literature on the significance of our deep and enduring need for monsters.— William M. Tsutsui, President and Professor of History, Hendrix College, and author of Godzilla on My Mind and Japanese Popular Culture and Globalization.

This insightful and powerful book challenges us to learn from our monsters about ourselves and our past, and to face our increasingly uncertain future alongside them.— Liz Gloyn, Senior Lecturer in Classics, Royal Holloway, University of London, and author of Tracking Classical Monsters in Popular Culture and The Ethics of the Family in Seneca.

The authors have foregone their royalty rights to make this book free to download via the publisher’s website. 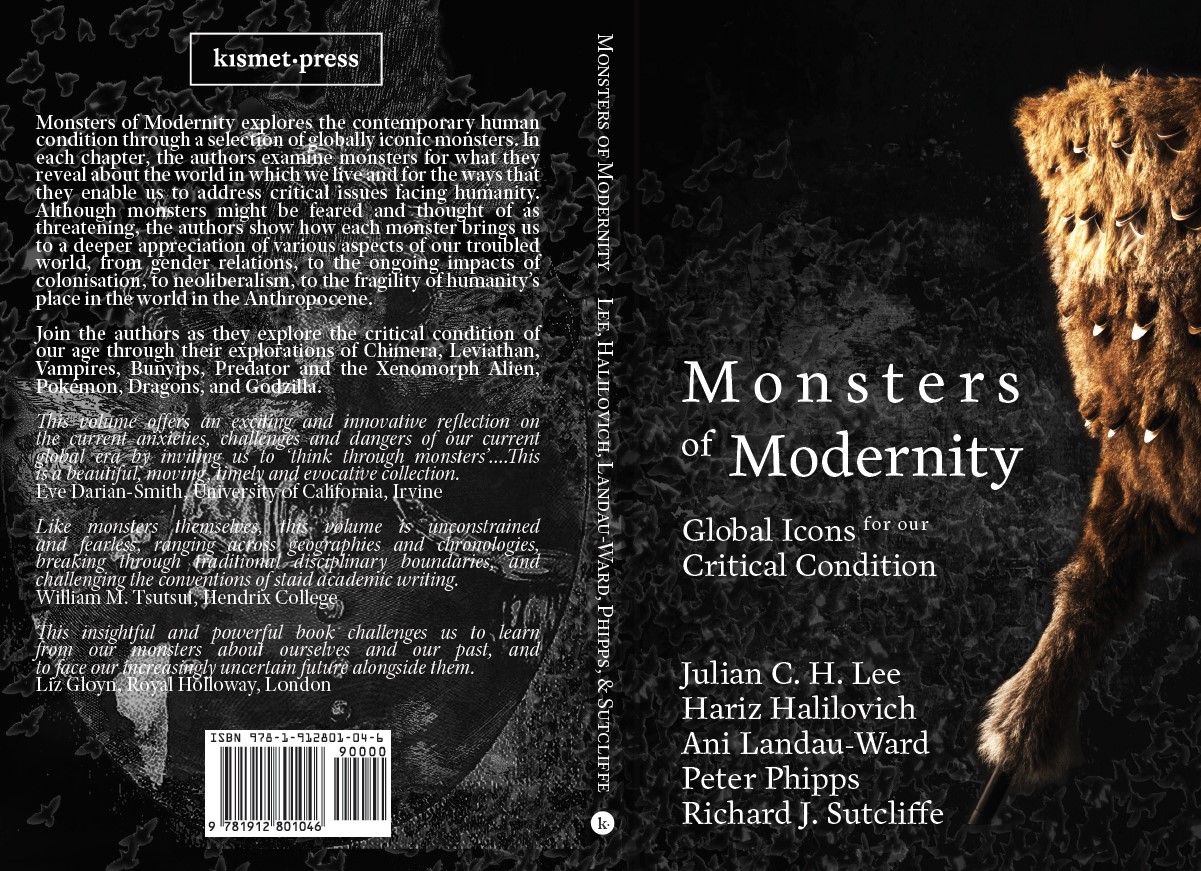